So, how do you choose how to occupy your time on that last Thursday evening in April? Discount the temptation of the Leaders Question Time or the continuing saga of the World Championship Snooker? And take yourself to the Mellor Centre for an evening of  'Water Power: Then & Now ' ? But of course, yes.

This mini conference of four speakers, John Hearle, Bob Humphrey-Taylor, Frank Thompson, and David King, attracted forty or so who had come to this wise decision, to head to the top of that historic hill, in Mellor.

John Hearle (Chairman, Mellor Archaeological Trust) started the ball rolling, with a sweeping journey through the history of water power, from India to Rome, via China (Han Dynasty) and ancient Islamic engineering. From undershot waterwheels to the highly efficient breast shot examples. On the way we saw remarkable examples of the worldwide collection of historic wheels. The first description of a water wheel came from Vitruvius, an engineer of the Augustan Age (31 BC - 14 AD). However, the first recorded mention of water wheel is in a Greek poem of 400 BC. ( above; waterwheel and stamps, Geevor, Cornwall). In England the Domesday Book of 1086 records 5,624 water wheels but there were probably many more. Moving onto the 18c and the dawn of the Industrial Revolution, in 1771 Richard Arkwright, turned from horses to water to power his spinning frames, and built to world’s first textile mill, in Cromford, the Spinning Frame becoming the Water Frame. The Wellington and Waterloo wheels at Mellor Mill and the Spade Forge Mill in Marple Bridge, local examples of the use of water power. (Wellington Wheel Pit below, prior to clearing) 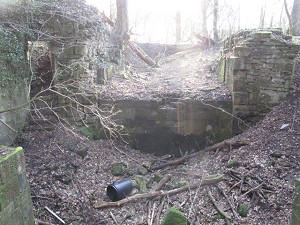 the Goyt and the mill leats from Floodgates Weir to the wheel pits of Mellor Mill and beyond. The stunning picture of Floodgates Weir from the viaduct was a treat for the audience. Bob described the re-routing of the River by Oldknow, (no planning applications then!) to suit the needs of his mill. The county boundary ran along the river before the changes, now the two are divorced for a short section. A cow was shown grazing alongside a waterwheel, partially buried in a field,  this wheel drove the corn threshing machine at Bottoms Hall Farm. Although outside the Grant approved works for the Revealing Oldknow's Legacy project MAT has been successful in gaining permission to investigate this

Water Wheel at some time in the future.

Frank Thompson, Committee Member and volunteer with the Stockport Hydro (left) scheme was the third speaker of the evening. Frank gave us not one, but two presentations. These concentrated on the physics that lie behind the production of power from water, and the design of devices to cope with differing heads and flow rates. The most illuminating fact revealed, at least to this scribe, was that Frank quoted the efficiency of steam engines to be 27%, whilst the efficiency of power derived from water power nears 90%. Stockport Hydro scheme, was funded primarily from a community share offer that produced more than £250k. Sufficient energy for 60 homes can be produced by the two main components, reversed Archimedes screws, Thunder & Lightning, which can operate independently and at variable speeds. The main source of income comes from the sale of electricity as the scheme receives "FiTs" payments - Feed-in-Tariffs. In October 2014 they passed a landmark of 400,000kwh of electricity produced.

The last speaker for this rewarding

evening was David King, a volunteer at Torrs Hydro Scheme in New Mills. David described the inception of the project, the design and building. Working since 2008, Archie, the 2.4-metre diameter reverse Archimedean screw generates up to 63 kW of electricity. It passed the 1,000,000 kWh mark for total electricity generated at 6:07am on Wednesday April 8th 2015. The biggest challenge in the construction was the lowering of Archie,who comes in at 10 tonnes and is 9 metres in length, 80 feet down into the Torrs Gorge (right), from the Union Road Bridge. Torr Weir was built across the Goyt, to provide a head for the Torr Mill which occupied the same site, this same head is now used by Archie to produce power. Torr Mill burnt down in 1912.

A short question and answer section followed, after which the meeting closed. An end to an enlightening evening reviewing a power source that has stood the test of time, used in those days long gone and for many a day in the future.

Three videos for your perusal: