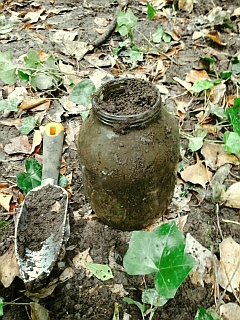 Stockport Metal Detecting Club have agreed to be our official metal detectorists. We welcome them as part of our wider team of volunteers. All the club members work to a nationally recognised code of practice and carry an ID card identifying them a bona fide members of the SMDC.

Since the nature of our dig at Mellor Mill involves using machinery to remove the bulk of the spoil it is inevitable that many small finds will be missed. By partnering with SMDC we will be able to recover many of those missed objects - every find they discover is a bonus for us. One unlikely detected object, discovered by Colin Wilson yesterday, was this glass jar which was buried next to the most westerly stone gatepost at the entrance to the stables and coach house.  I had earlier commented that there will still be many glass and pottery finds missed as there isn't yet a machine capable of detecting them. The jar was unearthed because it was full of galvanised fencing staples!  Colin also found the gate latch plate from the eastern gatepost. Last weekend a number of George V and Elizabeth II coins were found by SMDC members. However,we are still waiting to find a George III coin.