The University of Manchester Archaeological Unit (UMAU) and Mellor Archaeological Trust (MAT) carried out an archaeological evaluation in April/May 2009 at the site of Mellor Mill, Marple Bridge, Stockport (centred on the National Grid Reference of SJ 9670 8845). The evaluation was carried out as part of the Mellor Heritage Project (MHP); a three-year Heritage Lottery funded community archaeology project. A photographic survey and visual inspection of Mellor Mill's wheelpits, drive and access tunnels was also carried out during the works.

Mellor Mill was built between 1790 and 1793 and was part of a large estate centred here, owned and first developed by the important industrialist Samuel Oldknow.  The mill itself measured c.400 feet long and 42 feet wide with six stories and was one of the largest water-powered mills in the country when first built. Oldknow was a manufacturer of cotton, and in particular muslins, who later became a partner to the significant figure of Richard Arkwright Jnr. After Oldknow's death, the estate and mill continued working in cotton manufacture until a disastrous fire in 1892 which partly destroyed the main mill building and caused the mill to cease operations. The mill stood as a ruin until the 1930's when demolition of the remaining above ground remains took place.

The present site of the main Mellor Mill building lies mostly under heavy vegetation and tree cover with a small area at the southwest corner of the main mill utilised as a carpark. The evaluation took place within this carpark in the form of an open area excavation designated as Trench 1 with a further small trench (Trench 2) located in the western corner of the study area. 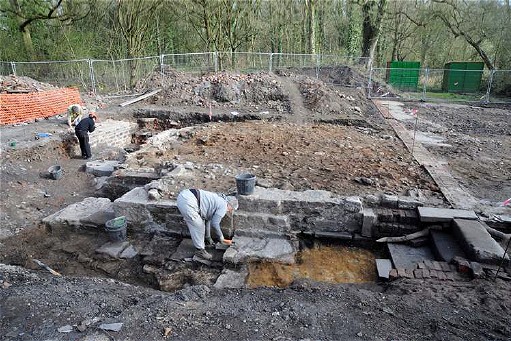 The evaluation proved successful in establishing a substantial level of surviving structural remains associated with the 18th century cotton mill in both trenches, as well as an early 19th century corn-drying kiln within Trench 1. Trench 1 also revealed the ground-floor remains of a late 19th century brick structure to the southeast between the southern elevation of the cotton mill and the mill pond which possibly served as a warehouse. A large assemblage of artefacts predominantly associated with a gassing frame were also recovered.

The western wall footings to the mill were uncovered together with a north-easterly return, which have helped establish the extent and orientation of the mill. An unexpected engine-room was also discovered within a basement of the mill with two engine beds still in-situ. It would also appear that the remains encompass at least four distinct building phases of the cotton mill complex which include the separate constructions of a warehouse to the southeast and a drying kiln connected to a corn mill.

The high level of survival of the building foundations together with a dense assemblage of artefacts associated with the cotton mill machinery provides excellent research potential for further works on the site. Although some scrap recovery and stone-robbing events appear to have taken place, the surviving remains
provide an unusual time-capsule of mill artefacts and features due to the rapid abandonment of the mill following the fire of 1892. These well-preserved remains would lend themselves aptly to community archaeological participation.

Click here to read a full pdf copy of the 2009 Archaeological Evaluation report.