The dig was a joint venture with another excavation by Glossopdale and Longdendale Archaeological Society (GLAS) in order to understand more about the Bronze Age landscape of this edge of the Peak District.

At the hilltop, we unloaded and sorted the equipment and then searched for our first target; a lumpy area about 50 yards north of the main cairn. In 2012, this could not be excavated because a bird was nesting on the interesting bump! It was not easy to strip off the vegetation and we bent two new brand new spades on the tough and unyielding tussock grass. It was hot and tiring work but we began to expose stones as flies gathered round the freshly exposed peat. We worked until 4pm before walking back to the farm and heading for home.

Next day, one of the students brings a petrol strimmer to help clear the excavation area. The de-turfing is completed by lunch, and at last we can begin our first cleanback with mattocks and spades; basically removing excess soil and roots. At this stage, I think my area needs even more careful soil removal. I use my trowel: within minutes, a beautiful flint blade about 4” long flips out of the soil and into my hands! Only day 2 and a major find! How could this not be a satellite cairn? The knife must have been deliberately placed there over 4,000 years ago, maybe an offering to a deceased loved one – but as you read on, the story changes. 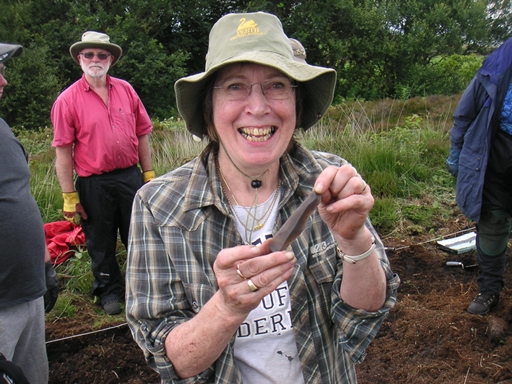 Maxine with the flint knife.

For the rest of the week, the weather is still smiling on us, work continues on the “cairnlet” and a few more flints are found. In the field south of the cairn area we put in a trench over an area that showed potential in 2011. We are looking for signs of human activity and/or settlement. Where did the people who built the Cairn live?

For the next two weeks, the dig continued. Sometimes it was too hot and one day there was a fierce wind. The trench in the field showed post-holes. In the cairnlet, more flints were found and more stones were exposed, but there was no sign of a burial. We were puzzled and so were the professional archaeologists. One clue was that the centre of the cairn had sand mixed with the stones. This suggested that it might have been where a tree was growing. We speculated on why the stones were piled up. Was it just clearance or was it somewhere where people rested and sat to knap the flints?

On the Saturday of the second week, an Open Day was held as part of the CBA Festival of Archaeology. It was a wet day, but Bob, Mel and students were up at the site to show visitors round. Meanwhile, MAT volunteers sat in the shelter of Shaw Farm barn, welcomed about 90 visitors, and showed them a display about the finds at Shaw Cairn. We were joined by Bethany, a friend of Graham Burgess, who had opened a pop-up café to sell coffee, tea and her delicious cakes. Despite the weather it was a good day

Bob is now away, but Mel Giles has given us her impressions..

The dig went well: we finished recording and digging on Wednesday [in the week after the planned three weeks] and have closed down the site and picked up tools. We will hopefully be able to cover the costs of the flint analysis from the Manchester budget and will process soil samples in-house. We may want a radiocarbon date as well.….Bob and I will be completing archive work in September and can talk with all the partners at that stage about their hopes and plans, and how Bob's landscape survey, excavation and analysis might complement that….. The basic interpretation has not really changed. This season's dig has investigated what appears to be a clearance cairn, created either from piecemeal improvement of the surrounding land, or perhaps as a store of stonework for the cairn itself. There are other features in the second trench but before we get the results of the soil analysis and a date for it, I wouldn't like to hazard a guess as to its purpose and period.

John Hearle writes 'Mel Giles from the Department of Archaeology at Manchester University has sent the following account  of the summer dig at Shaw Cairn.'

“The 2014 season at Shaw cairn was a productive one, involving volunteers from the Mellor Trust and the Glossop Archaeological Society, working alongside students from the Universities of Sheffield and Manchester. The excavation directors, Dr Bob Johnston (Sheffield) and Dr Melanie Giles (Manchester) were delighted with both the quality of the work and the success of the Open Day, which depended as ever on the goodwill and support from George and Nicky Burgess and family (landowners).

Two trenches were opened, alongside a variety of test pits which completed the landscape sample around Shaw cairn. One trench focused on the stake-hole features discovered in a previous season, and this trench yielded two interesting sub-rectangular/amorphous features, associated with burned material which were sampled for environmental analysis and potential dating. At present, there is no direct evidence for the date of these features so further analysis is needed. The other trench focused on a small cairn identified in landscape survey, to the north of the main Shaw cairn. Upon excavation, this appears to be a small clearance cairn, possibly built on a natural geological anomaly, which created a sandy knoll. It may have been stabilised by something like a tree, growing over the knoll. The prominent feature has been exaggerated in appearance through the addition of clearance stones, in which were discovered quantities of quartzite pebbles, a fragment of saddle quern and rare pieces of worked flint. A fine flint blade was discovered laid on the edge of the cairn, possibly as a deliberate deposit. Larger quantities of worked flint (some heavily rolled and abraded) appear to have been washed/rolled downhill, up against the southern and western edges of this cairn. This provides important insights into wider activity in the landscape which may have coalesced around the cairns. Further flint work from the test pits adds to this important picture of inhabitation in the surrounding landscape though only detailed analysis will reveal the range of dates and tasks that these artefacts represent.

Over the winter, a publication plan will be drawn up to draw together research on Shaw cairn, towards final reporting.”