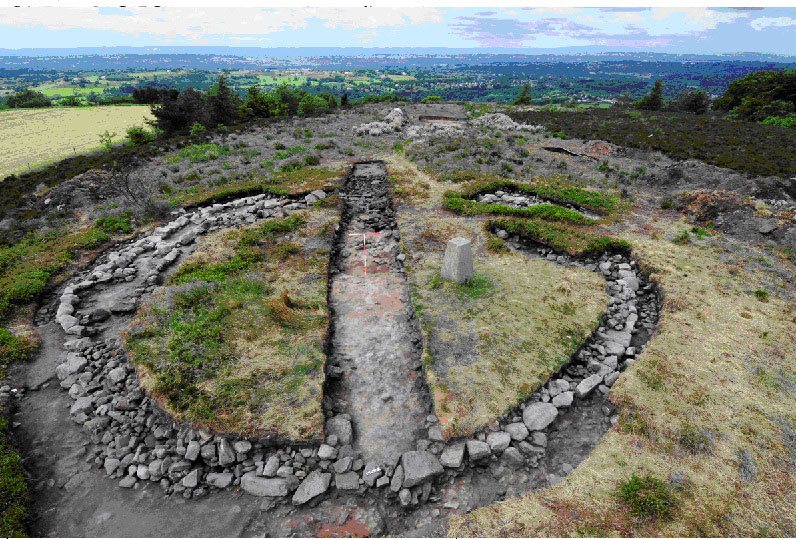 No further work was carried out at the Mellor Old Vicarage site. In July, a two-week dig by students and Trust volunteers at Shaw Cairn on Mellor Moor was led by Dr Bob Johnston of Sheffield University and Donald Reid from the Trust. Unfortunately bad weather before and during the dig hampered the work. The farmer had been unable to cut the grass, so that excavations in the adjacent fields, which had produced interesting results in 2011, could not be continued. Attention turned to two bumps in the ground in the area around the cairn, but one could not be excavated because a bird was nesting on it. The other, adjacent to the field wall, did not yield anything of archaeological interest. It is planned to continue to work annually to find out more about this site and particularly where people would have lived in Neolithic and Bronze Age times.

The major effort has been at Mellor Mill. In March, the Wellington wheelpit under the mill, which had been cleared of 120 tons of debris and provided with a viewing platform, was formally opened by Mark Sissons, Chairman of the Association for Industrial Archaeology, which had provided a grant of £15,000 in support of the work. Excavation of other parts of the mill has been continued by volunteers led by Robert Humphrey-Taylor and Rachel Miller.

In December 2011, the Trust had submitted an application to the Heritage Lottery Fund (HLF) for a grant to open up for public viewing the three areas of Samuel Oldknow’s industrial complex, the mill site, the area nearer the river with workshops, gasworks and stables and Oldknow’s mansion and to provide the outreach to schools and the public as needed by HLF. The application was rejected but we were encouraged to join with British Waterways (now Canal and River Trust), who had submitted an application related to the Marple canal corridor, which had been promoted by Oldknow. In June 2012, a joint application for “Revealing Oldknow’s Legacy: Mellor Mill and the Peak Forest Canal in Marple” was submitted and, in September, was accepted at stage 1 by HLF. Work then started on the development stage, which required uncovering parts of all the buildings to show that remains were present and could be displayed after full excavation. Other activity included development of an educational programme, and plans for innovative IT including on-site access to information by mobile phone or iPad etc, a DVD with 3D visualisations, and publications.

The Trust website, www.mellorheritage.org.uk, was dominated by accounts of the Old Vicarage site, which has now closed. The website has been converted into a dormant site, www.mellorarchaeology-2000-2010.org.uk. A new website, www.matrust.org.uk, has been launched to reflect the current activities of the Trust, particularly at Mellor Mill and Shaw Cairn.

The Trust continues to be supported by a large group of Friends. A Christmas lunch was held at the Roman Lakes when Chris Mann showed examples of his filming. Late in the year, the original oil painting of Mellor Mill by Joseph Parry came on the market and was temporarily bought by the Chairman. A public appeal was launched to enable the Trust to acquire the painting, which will be hung in Marple Library.