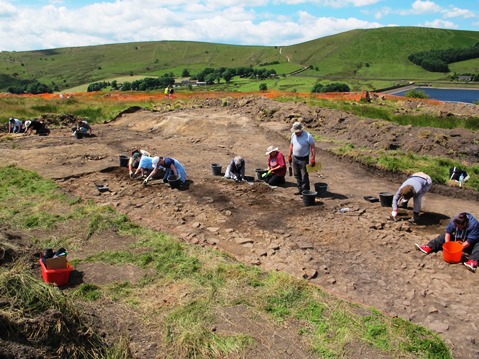 About a dozen Friends of the Trust braved the weather and were met at Castlefield Centre car park by Norman Redhead, County Archaeologist, and three Friends of Castleshaw Roman Forts (FCRF) at 10-30 on August 2. Two keen walkers climbed the hill but the rest drove up to the site where FCRF had been excavating for three weeks. It is next to the old hamlet of Lower Castleshaw with its one remaining house. As part of the HLF-supported project, 300 schoolchildren had dug the site of an old cottage where sensitive archaeology could not be disturbed. The main site was much like Mellor with subtle changes of colour in the soil showing the ancient features. Many of the volunteers were inexperienced so it was a good training exercise led by CfAA, Salford University, including our own John Roberts. 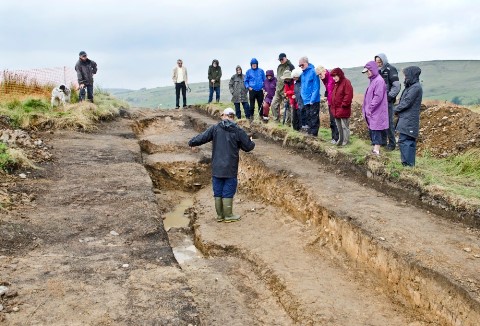 Norman was a marvelous guide. He – and John Roberts - dug there in the 1980s and Norman has a great knowledge of the earlier excavations. Note the plural Forts in FCRF. The larger Fort was from AD79, the time of Agricola’s troubles with a faction of the Brigantes (when we think that the East entrance at Mellor was closed off and a second palisade built). The smaller Fortlet, from AD105, was a station on the Roman road from Chester to York. For more information see www.castleshawarchaeology.co.uk.

The site is a Scheduled Monument and English Heritage gave permission only to re-excavate earlier trenches. Nevertheless this uncovered new evidence and it is hoped that permission will be given for wider excavation in the future. As Norman wrote: 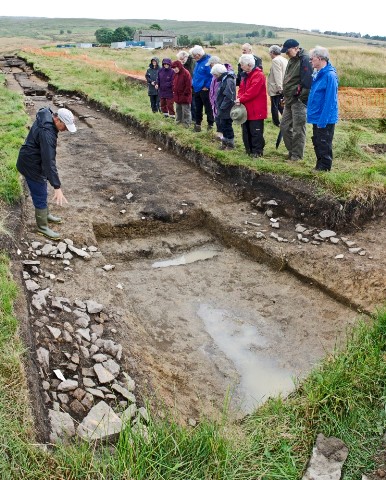 'The excavations have revealed no less than 6 separate Roman roads!, together with the fort east gateway, rampart and ditches, remains of barrack blocks and a workshop, as well as re-investigating the site of a pit full of prehistoric (Bronze Age) pottery found during excavations in 1963. A fascinating range of finds have been revealed; from prehistoric flint tools to fine Roman table ware known as Samian. Around 300 local school children and 150 adult volunteers have taken park, trained and led by a small team of archaeologists from the University of Salford, working with the Friends of Castleshaw Roman Forts who have organised the dig and its funding (mainly through a Heritage Lottery Fund grant). A number of groups with a special interest have also taken part, and there have been many visitors both casual and through organised parties. A series of training workshops have been organised to help train the volunteers; including archaeological techniques, geophysics, and Samian ware and Roman pottery. The excavation has revealed unexpectedly complex archaeological remains which will shed new light on our understanding of the first Roman fort at the site and later activity.

Fortunately, the rain held off until we were looking at the last trench. The impression of the visit is summarized in an e-mail from Faith Cleverdon:

Many thanks … for arranging such an excellent visit. We both enjoyed it and thought it was well worth travelling [from Leek]. Joan, as a former history advisor to some of Staffordshire’s primary schools, was particularly impressed at the idea that 300 or so children were able to take part. Sorry we didn’t stay for the Museum – she had already seen it and both of us were very wet and wanted to get home to change.

all photos by Arthur Procter 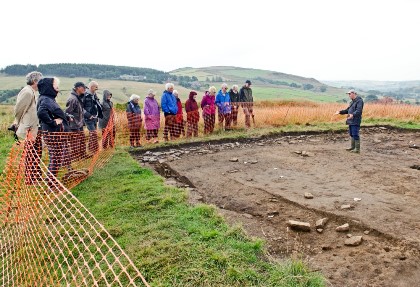