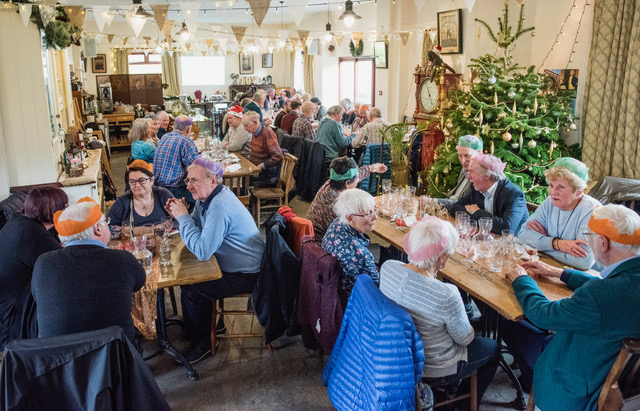 ‘Their Christmas starts here’ to paraphrase the clarion call of ‘Ready –Steady Go’, ‘The weekend starts here'. That Friday evening programme that must have been essential viewing for many of the day’s diners, when they were nowt but lads and lasses, the sallow youths of many a year ago.

But as well as play this weekend, work had to done. Work in ‘manning’ the MAT stall at Saturday’s Winter Wonderland in Marple Bridge, led by Bob & Hilary Humphrey – Taylor. The Trust’s Gazebo sat midst Morris Men, the Manchester rock Choir and a host of entertainers both those young and those not so young.

Sunday was play time, and h 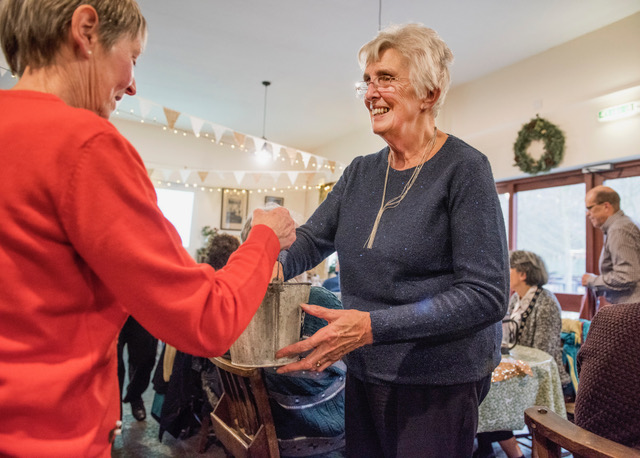 ow we did at Roman Lakes. Our heartfelt thanks must go to the Seward family, who once again pulled out all the stops for the Trust.

With studied patience, and in anticipation, the raffle tickets were waiting to be sold, the mulled wine to be drunk, the afternoon was to prove that neither would to be disappointed. The serried ranks of glasses were broken up, rafflse ticket folded. The room was populated with tables, seasonally decorated with such skill. A skill that was later reflected in the quality of the meal served, both sumptuous and delicious.

The pre-amble drew to a close; seats were taken, crackers pulled and the hubbub of excited conversation grew, only to be silenced by the arrival of food, glorious food. Two courses later, it may be a fair estimate that a diner or two may have uttered “After all that food, I'm as full as an egg!”
Time for the floor show, the ‘turn’ for the day, time to welcome Mr Donald Reid and the tale of ‘St. Kilda’.

And Don did not disappoint….. 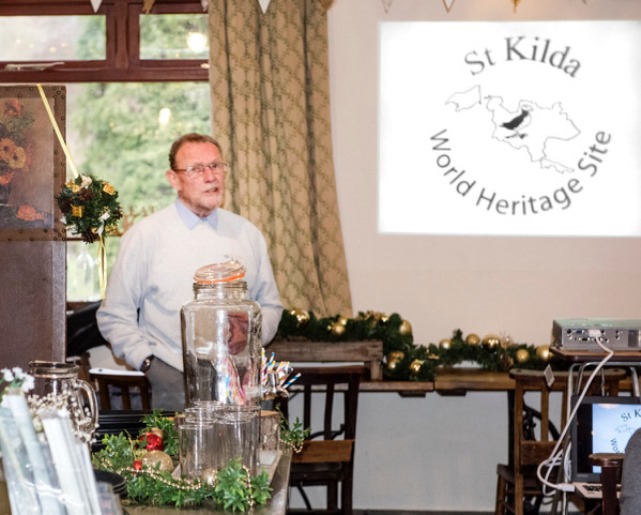 ‘It is a riddle, wrapped in a mystery, inside an enigma; but perhaps there is a key'. Could this describe the thoughts of one or more of the diners awaiting Don's talk? Would Don provide the key in his talk? The lights dimmed. “Face the front!”, they did. The chatter faded, a hush enveloped the audience. Let the show begin; let the mystery unravel.

Don took us on a tour of the Archipelago of St Kilda, leading the audience through the geography, history, archaeology, and natural history of the island and the experience of living and working in this remotest of spots, the remotest part of the British Isles, which lies 41 miles (66 kilometres) west of Benbecula , Outer Hebrides.

What a story to bring the afternoon to a close, an afternoon full of warmth, friendships, good company and of course that wood-burning stove.

Our sincere thanks to Don Reid, and to both the Seward family and their staff at the Roman Lakes, for making this Sunday afternoon in December one to cherish in memory, for many a day.

Two videos of St. Kilda lie below the gallery of photos.