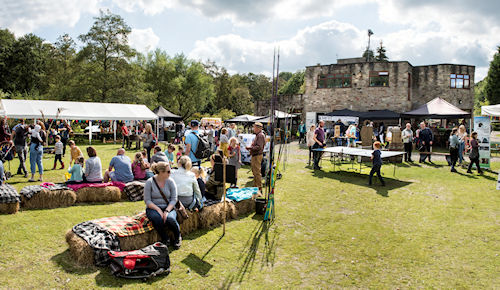 As the summer turns its face towards autumn and begins to give way, the long wait is over for those beavering behind the scenes; the dawn of Sunday 8th September heralded the Fact & Fun Day of 2019. Volunteers scanned their print-offs, when would they be needed and where, those jobs just had to be done! Gazebos to erect, fingers fiddling with fittings, displays, artefacts, flyers to fill tables, the beginnings - the hors d'oeuvre of the day. The sun breaking 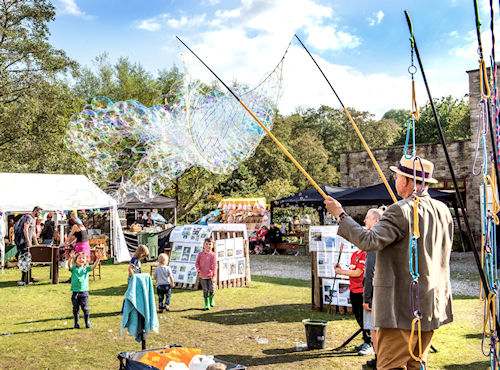 through the clouds, good weather was with us, and the show was about to begin.
On offer…. ecology & heritage display, live music, local produce, rural crafts, pop up museum, beer tent, food stall, guided tours, traditional fete games.

Though business started at a trickle, by noon the stream of visitors was in full flow. Many questions, during the tours of the mill site, interest in the project grew as the parties were led round. This serves as an indication of the invaluable work that has been carried out by Bob and his team in opening up the area, to reveal some of the history of this important site.

As the day rolls down to the end, incomers become ‘outgoers’, perhaps a wry smile comes to one or two stall holders, café workers, and mill guides, “We’ve done it again!”

A feature of the last two Fact & Fun Days has been the walk of the younger Ludworth School children from Marple Bridge, pass the site were their forbearers had toiled at machines , and onto the commercial development site of a mill pond, Roman Lakes. We know not of the future of these children, but know of the past of those children that walked on another Sunday morning to All Saints Church, some 200 years ago, from the Apprentice House to All Saints Church, pass the pee stone, walking in the opposite direction.

“Research has shown that the average age at which children started work in early 19th-century Britain was 10 years old, but that this varied widely between regions. In industrial areas, children started work on average at eight and a half years old. Most of these young workers entered the factories as piecers, standing at the spinning machines repairing breaks in the thread. A few started as scavengers, crawling beneath the machinery to clear it of dirt, dust or anything else that might disturb the mechanism.”

But what of the history of their destination this 2019 Sunday?

Roman Lakes has had other visitors !
A birth…..

On the 1st July 1865 railway line from Compstall to Marple and New Mills was opened. Various engineering problems had delayed the construction.
As Victoria’s reign neared its end, the numbers of visitors to Marple increased. In 1884, a newspaper reported that

“Marple Station was greatly thronged on Good Friday…between two and three thousand visited the place by ordinary and special train”. 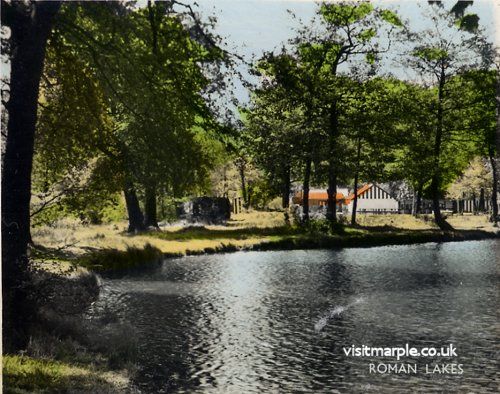 tea-shops opened and cottagers sold pots of tea Tea Rooms , Roman Lake sat their front doors, farmers opened their fields for picnics. On a Saturday in June 1896, 3000 visitors came from Oldham alone and, according to a newspaper report,more than 20,000 people visited Marple Bridge on Good Friday,1933. The destruction of Mellor Mill had led to the biggest attraction.
At Christmas 1892, Edwin Furness, who had been manager of the mill, sat in the parlour of his home at Strawberry Hill, with his brother, who was Chairman of Ardwick AFC, which had that year become a founder member of the Football League and two years later would become Manchester City.

“What shall I do now? We’ll soon have cleared up what we can at the mill. Mr Arkwright won’t want me after Easter.”
“I’ve been thinking about that. You know, pleasure parks are becoming popular. Couldn’t you have one here?”
“Well, maybe! I suppose we could use the millponds for boating.
“You need a good name. Why not call them the Roman Lakes. People aren’t to know that they weren’t dug by the Romans.”
“I think Arkwright would lease me the land. It’s not worth much.”

So the Roman Lakes Leisure Park was born and the old packhorse bridge across the Goyt became Edwardian Ladies test loading Roman Bridge. (collective noun for Edwardian Ladies, anyone ?)

Manchester Evening News of Saturday 26 May 1945. 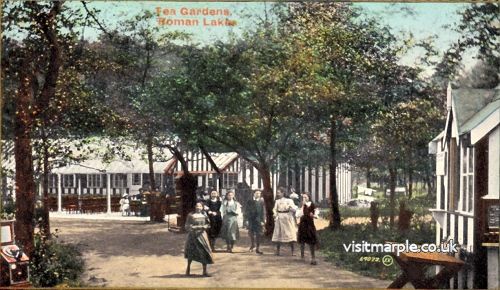 Hikers Trains Special trains for hikers were running. Holiday accommodation in the Peak district is fully booked for this week-end. Hundreds of thousands of workers from a large 'area in Derbyshire, Cheshire and parts of Lancashire are having their Whit-holiday this week-end until Tuesday morning. There were many cyclists on the Derbyshire roads to-day. Many children from Sunday schools in Manchester and district have been in North Cheshire this week and more are expected to-day. The Roman Lakes at Marple attracted between 8,000 and 10,000 people yesterday, and many made their way there to-day. Boating was in full swing and the youngsters were able to paddle at the edge of the lake. 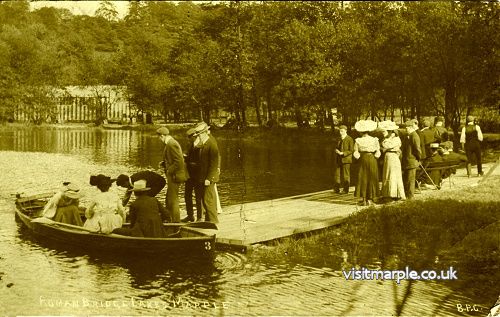 Treat to the Juvenile Members of Grand Union of Oddfellows
The Juvenile members and friends of the above Order, to the number of 140, travelled to Rose Hill, on Saturday last, by the 2-27 train from Central Station for their annual picnic to the Roman Lakes, Marple. The weather being beautifully tine a pleasant walk brought the party to their destination, a splendid wooded district. Tea was provided by the manager, Mr. Furniss in a very short time after arrival, and to which everyone did ample justice. After tea boating was indulged in by the elder members, while the younger preferred the motor launch. Sports were also arranged. and a goodly number of prises were competed for in an adjoining field, kindly lent by the farmer. The return journey was resumed at 7-33, arriving at Macclesfield at 8 o'clock, this terminating a very enjoyable outing. The juveniles were in charge of the following officers —Bros. J. Walthall, D.M., S. Clowee, D.M. Nr., C. Oldham, D.S.. E. Hyde. W. Hicks, T. Henault. S. Swindells, W. Spooner, H. Chappell. W. Braoegirdle, etc.. and a number of ladies also assisted in serving teas. Bro. T. Nixon, who resides at Marple kindly pioneered the party. The arrangemen ts for travelling facilities were satisfactorily executed by Mr. Ledger, the Station master.

From the Manchester Guardian 14 Apr 1914
The Bank Holiday: in the country the Peak District 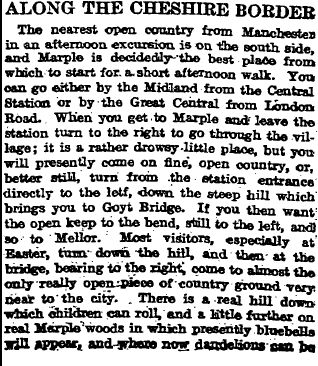 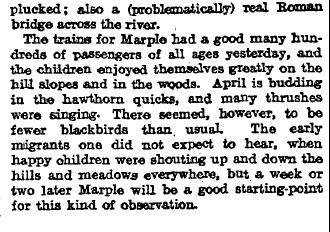 And what of the Mill, now revealed in part after a hidden period of some 100 years plus ? 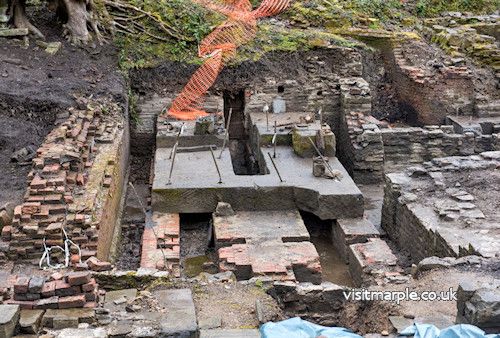 On Friday evening last, a very liberal repast was prepared at the house of Mr. George Swain, The Navigation Inn, Marple, for the managers the overlookers, and a number of employés belonging to the cotton-spinning establishment of Peter Arkwright, Esq of Mellor, on the occasion of the erection of two new engines, boilers and large chimney, on the premises. It is somewhat remarkable that this model factory has been turned by a large and well-constructed water wheel, supplied by an extensive reservoir on the premises, and from the River Goyt. Owing, however, to the drought that has prevailed for the last two or three years, that vast spinning establishment could not be carried on so regularly and as heretofore, and hence the necessary for providing additional moving power, which has now been successfully and satisfactorily completed by and under the direction of, Mr. Benjamin Goodfellow, of Hyde. On testing the engines which gave unqualified satisfaction, the above mentioned “spread”, was given, which reflected much credit upon the caterers. After the cloth was down, Mr. Wheeldon, the manager was called upon to preside, when the songs, toasts, recitals’ followed each other, and the evening passed most pleasantly –Miss Swain presiding at the piano-forte, and singing several favourite songs, and joining in with her brother, Master Charles Swain, in some choice duels.

But then the fire of November 1892, hands thrown out of work. 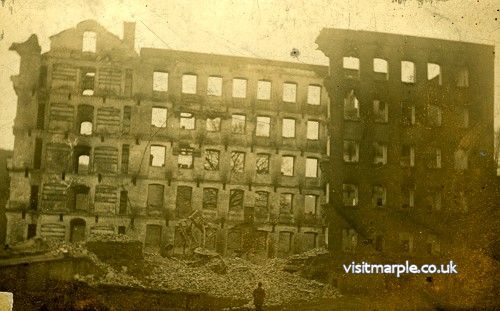 The Recent Fire at Mellor

Meeting at Marple – On Thursday evening, an adjourned meeting of the gentlemen called together on Thursday week by Rev. R.S. Adams M.A. was held in the Union Rooms Marple, when there was a large attendance. The vicar presided. Statements respecting the number and the circumstances of the operators thrown out of employment were mad and after some discussion an executive committee of fourteen gentlemen was chosen to deal with the matter. Several subscriptions towards the fund to help the most needy cases were promised, during the meeting, over £100 was thus obtained.

The New Mills Brass band, conducted by Mr. Stephen Beard, visited Marple last Saturday, and gave their services in aid of the Distressed Operatives Funds. About £8 was collected along the route of the bands procession. It may be stated that the Bottoms Mill Fire Relief Fund committee have subscriptions paid to the bank amounting to over £200. The members of the Arkwright family gave subscribed upwards of £80 alone. Those persons in real distress by the late fire are being assisted.