The excavation of the engine house and gearing passage at Mellor Mill has made great progress. The boiler seatings, engine bed and bearing foundations have all been exposed and allow some estimates of the size and layout of the power transmission system to made. Several of the diggers have said that they had difficulty in visualising what it was that they were digging up, and my descriptions in terms of whirling gear wheels, shafts, couplings etc., did not seem to help them. 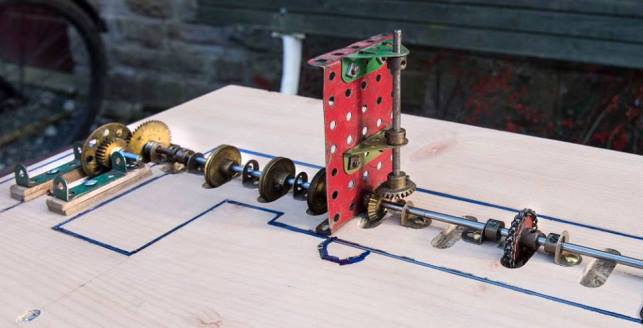 Over the Christmas break I made a model in Meccano of how the whole of the system might have been. This was not intended to be a scale model, but more of a general layout. It is very much a first attempt, a draft version. It is rough and unpainted, the parts are screwed together and not glued and so it can be, and I hope will be, changed. I could not get gears of the correct size and, so that the model was a reasonable size yet meaningful, I had to use one scale for north to south and another scale for east to west. The base board is 34 inches by 13 inches (86 cm by 33 cm) and will easily fit in the boot of a car. The three water wheels in their pits and the engine on its bed are shown, as are the shafts and gear wheels connecting them. Some of the drives to the machinery and the vertical shaft to take the power to the uppe 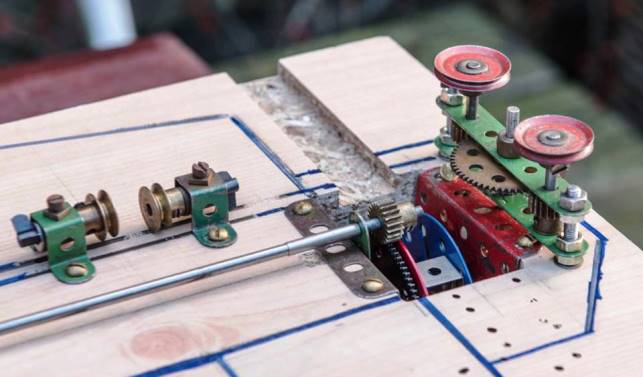 r floors are there. All are driven by a battery powered motor, which is hidden under the base board and all the components rotate at approximately the right relative speeds. Each waterwheel and the engine can be uncoupled individually as in reality.

However, the excavations are not yet finished. As the power transmission system developed over a hundred years, we can but guess at what it was like at any one time. The model therefore only tries to portray one of several possibilities and does not pretend to be exact. It is therefore probably wrong, but in which way it is wrong and how much it is wrong I do not know. When the excavation has been completed, the documentary evidence has been examined and everyone has thrown in their ideas, we will have a clearer idea.
Another attempt at modelling the power transmission system could then be made.