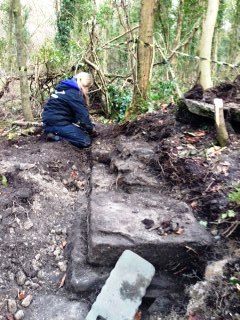 The Trust’s purpose is to support research in the archaeology of Mellor, Stockport, Greater Manchester, and to bring it to the public in a variety of ways.

The major activity in 2013 was to complete stage 1 (development) of an application to the Heritage Lottery Fund for the project “Revealing Oldknow’s Legacy: Mellor Mill and the Peak Forest Canal n Marple”. This was carried out jointly with Canal and River Trust. The stage 2 (delivery) application was submitted in May and an award of £1.5 million was made in September. With additional matching funds and the notional cost of volunteer time, the total project came out at £2,315,556.

The Trust’s main effort will be devoted to opening up the 18th-18th industrial complex to form Mellor Mill Heritage Park. When it was built by Samuel Oldknow in 1790-92, it was the largest and most impressive cotton mill in the world and the final flowering of water power. The mill was burnt out in 1892, all remaining buildings had been removed by the 1950s. The three areas of the complex, the mill site, the workshops nearer the River Goyt, and Oldknow’s mansion, reverted to woodland.

In the remainder of the year, it was necessary to arrange a lease of the site. The landlord, Bernard Sewart of Roman Lakes Leisure Park (former millponds) was wholly supportive and offered a lease at a peppercorn rent. However, settling the legal details was time consuming and the lease had not been finalised by the end of the year. Permission for the official start of the project was thus delayed until 2014. Nevertheless, volunteers continued to work on excavatiing other parts of the mill site.

It had been hoped to continue excavations at Shaw Cairn on Mellor Mill with support from Sheffield University as in previous years. However, other academic commitments meant that this had to be postponed until 2014.

Fund-raising continued for the purchase of the oil painting by Joseph Parry of Mellor Mill in 1805. The Cooperative Community Fund met half of the cost and generous donations covered the remainder with a surplus for conservation and hanging in Marple Library.

Other activities of the Trust in 2013 include: