If you want to volunteer to help, contact Bob at This email address is being protected from spambots. You need JavaScript enabled to view it.

To go to the beginning and display in chronological order click here.

We have just finished our last weekend, working on the mill, of 2013. We will be back down there digging on the 11th January 2014 and then  back to the usual routing of every weekend between the hours of 10.00 and 16.00.

This weekend we have uncovered yet another mystery. In the semi- basement of the northern 3 storey wing we uncovered sections of the flagged floor.  However, where some of the flags were missing there as some brickwork below! Why would it be there running underneath the  flagged floor?

Watch the video below to see the area we have been working on and see if you can come up with a plausible answer.

A very Happy Christmas to all and best wishes for 2014 when I am sure it will be a great year for Industrial Archaeology in Mellor. 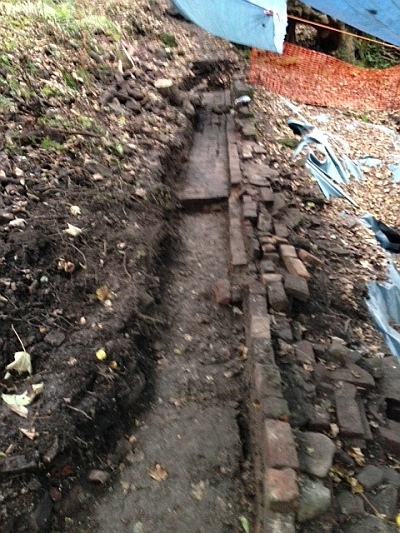 threat of snow later in the week. The diggers, both human and machine, have b 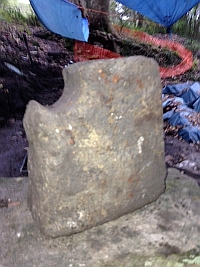 een busy over the weekend. The human diggers (Neil, Rachel and Eric) have succeeded in completing an excavated run from one end to the other of the high level boiler foundations. (See picture right.) The other interesting find is a carefully shaped piece of stone which, we imagine, was used as a support for some boiler house pipe work.(See picture left.)The machine digger has also been busy moving the,never ending, spoil heaps away from the hand diggers areas of activity.

This weekend we will have a digger down at the mill - there are many hundreds of tons of spoil to move so that the archaeologists can continue their work.

We have to operate a 'leapfrogging" system.

The diggers (volunteers) move their spoil to a location that can be reached by the digger. We then have to move it from the dumping area  to as far as the digger will reach (about 6 metres). It then needs moving on to a position where a truck with a grab can take it away. 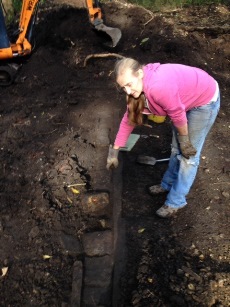 It has been a fine weekend and a great opportunity to move some of the spoil heaps out of the way of the dig. So having collected a 1.5 ton digger from Wright Hire I arrived at the mill site at 9am on Saturday and by 4pm had managed to shift about 100 tons of spoil from the Engine House area.  On Sunday it was a similar routine only this time to move some of the temporary spoil heaps to their final destination, near to the road, from where they will eventually be removed off site.  I think there is going to be about 9,000 tons of spoil to take away through the course of the project with a further 3,000 tons being used on site for landscaping.

On Sunday whilst digging away we discovered what appears to be some of the original kerb, to the drive, on the forecourt of the mill (see photograph).  It is always exciting to find a new feature especially one like this which was quickly uncovered and cleaned up.  Here is hoping for many more dry and sunny weekends throughout the winter months.  We have now reduced our, on site, guides' hours to Sundays from 10.30am to 1pm and 1pm to 3.30pm until the lighter days return in the Spring.

(from the archives, early days at the Northern End, September 29th 2013)

We are in that pregnant pause between the submission of our bid to The Heritage Lottery Fund and the panel’s decision.
The project has been running, on limited resources, for two years and we have built up a ‘head of steam’ which we don’t want to lose. Our volunteers have been stoical in their toils to identify all the buildings and features at the Mellor Mill site in order for a definitive survey to be carried out as part of the HLF Stage 2 submission.  The survey completed and our bid safely deposited with HLF we were determined that we would carry on with the excavations as if the HLF award had been made.

At the end of July we found ourselves starting to excavate at the northern extremity of the main Mill complex.This is the boiler house and the steam engine house.  A building, constructed in 1860, which is detached from the main Mill, housed the Lancashire Boiler and two horizontal steam engines, manufactured by Goodfellows of Hyde.  We started to investigate the depression where the building once stood but now was only showing the top few inches of the long engine holding down bolts above the debris and dense undergrowth.

Early on we uncovered what, at first, was thought to be the boiler flue but this seemed to be in the wrong location. The latest interpretation is that it is an economizer providing pre-heated water to the boilers to save on fuel.