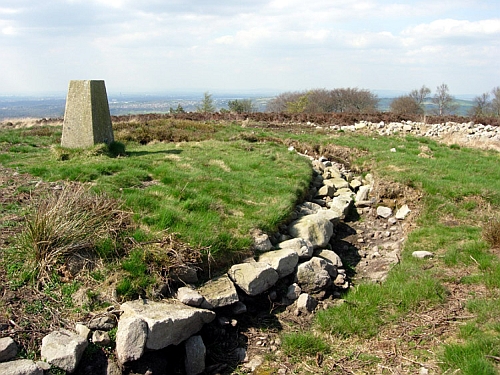 The digs at Shaw Cairn on Mellor Moor in 2008 and 2009, with the discovery of amber beads in a Bronze Age cist, showed that more should be done at this site. In 2010, John Hearle e-mailed Professor Mike Parker-Pearson at Sheffield University to see if he could join in leading further excavations. Mike was fully committed, but he passed the message to his colleague, Dr Bob Johnston, who was keen to work with Mellor Archaeology Trust (MAT). In 2011, Bob and Sheffield students joined MAT volunteers and made interesting discoveries in trial trenches in the adjoining fields. A joint 2012 dig was marred by bad weather and little was found. [See 2011 and 2012 reports.]

A bigger effort was planned for 2013 with students from Manchester University, led by Dr Mel Giles, joining the Sheffield and MAT groups. Unfortunately, other commitments at the University meant that Bob was not able to carry on with this plan. However, it is expected that there will be a joint Sheffield-Manchester-MAT excavation in July 2014 and that the effort will continue for many years. The advantage for MAT is that the University involvement means that it avoids the expense of employing an external professional archaeologist to supervise the work. The costs are relatively small and can be met from MAT funds, the student fieldwork programme, and other small grants. The input from MAT is led by the Trustees, Donald Reid and Maxine Wild, and another Trustee, George Burgess of Shaw Farm, is supportive of work on his land.

There are other exciting opportunities for a wider study of the Bronze Age landscape in this part of the western Peak District. Shaw Cairn is just one of a number of Bronze Age burial sites. On Ludworth Moor, there are the Bronze Age barrows at Brownlow and the Intakes, explored by Reverend Marriott around 1800. There is some limited evidence of Bronze Age activity on the Old Vicarage site. The big question is “where did the people live?